Erik Karlsson has quickly become a passionate golfer. He started playing seven years ago, but only regularly for the past four years and his athletic gifts have allowed him to get his handicap index at the Royal Ottawa Golf Club down to 9.5. 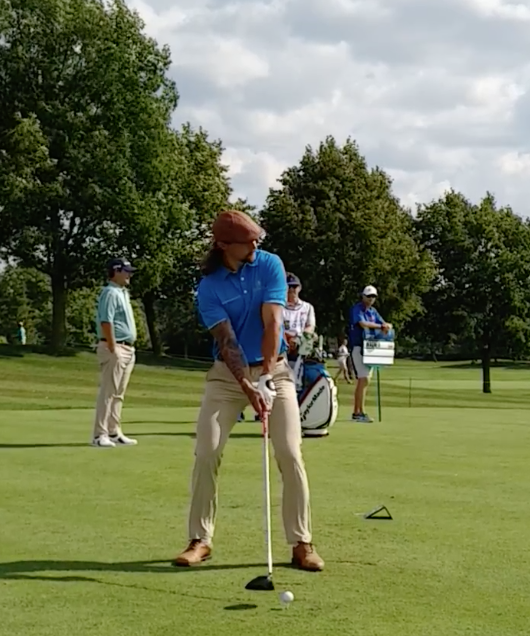 Karlsson depends on his tremendous athletic ability at this point. He has a shallow backswing that stops at about three-quarters and he unwinds to deliver a powerful blow to the ball. He played in the RBC Canadian Open Championship Pro-Am at Glen Abbey on Wednesday and showed he can miss it both ways off the tee, but he hit some good iron shots and flashed the kind of touch around the greens you would expect of a world-class athlete.

On the first hole, he hit an approach from about 70 yards that was well judged, landing in the fringe and rolling up to within eight feet of the hole. "Nice shot," said PGA Tour pro Johnson Wagner.

"Lucky," Karlsson said, who then turned and gave a wave to two volunteers who applauded the shot.

He was a popular figure at the RBC Canadian Open on a hot and steamy day. He's vocal and animated during his round. He obliged fans with autographs or selfies. Karlsson, who can become an unrestricted free agent next summer has been the subject of trade rumours since February, got a lot of comments from the many Toronto Maple Leafs fans at Glen Abbey.

"Come to Toronto," yelled one fan as Karlsson, sipping from a bottle of water, made his way to the tee. Karlsson started coughing.

"You made me choke on my water," he said.

After his round at Glen Abbey, he sat down with Rideau View Golf Insider Chris Stevenson to talk about his love for the game. Here is an edited version of the conversation.

CS: That looked like a lot of golf course today What do you think it played at?

EK: I didn't find it too bad. We played the tees up front. Sixty-five (hundred)?

CS: What do you figure your average drive would be?

EK: My index is nine and a half. It's up and down. I've had a few good ones and a few atrocious ones."

CS: What's the strength of your game right now?

EK: My length. I hit it long so I never have any issues, par-5s are usually good. My weakness is they are not always as straight as they should be. I would have to say that's my weakness. My putting is just average, too. If I ever get the chance to play all year round, then I would probably get a coach. My alignment is terrible. If it's on, it's fine, but as soon as I start losing it, I can spray it a little bit too much."

CS: How many times a week do you play now?

CS: Are you a morning or an afternoon guy?

EK: When I train for the off-season I'm an afternoon guy, but I like to play in the morning. I like to be done before lunch. I like to come off the course and have lunch. That's the most enjoyable thing. I train early morning so golf has to come after that, unfortunately."

CS: You've been a member at Royal Ottawa along with (former Senators captain Daniel Alfredsson). Who usually wins when you play Alfie?

EK: We're usually a team. He's a scratch handicap and I'm a high handicap, so I get a lot of strokes and he just plays steady. We usually don't play against each other, but if we did play each other it would be a toss up because he would have to give me 11 or 12 strokes. If I'm playing well, I should beat him. We haven't played a serious game against each other in a long time. We're a good combo when we play together, actually.

CS: You've had a chance to play some pretty good golf courses. What's the golf course you have enjoyed the most?

EK: I would have to say Augusta. That's an easy one. I've played it a few times. Oakmont, too. I really enjoyed playing Oakmont. It's very different golf. I'd say Augusta, definitely, because of the whole experience. I got to play the pro tees, too, which was fun.

CS: Would you consider yourself a golf equipment geek?

EK: I would like to say I am not, but I am a little bit. I like the new stuff. I watch what the pros play. I've played everything from Callaway to Titleist and I have a set of Miura irons which is really nice and I played really good golf with them one summer, but they are not friendly to me which I noticed the more I started playing. Whatever looks good in my mind. I'm thinking about getting the new PXGs because you can get them all black which is pretty cool for a hobby golfer like me.

CS: What driver are you hitting these days?

EK: I'm hitting a 13.5 (degree) Callaway, the Rogue, the new one. I really like it. I like the look of it. I lose some yards, but my misses are so much slimmer. I usually don't miss it the way I used to before which in my game is more important.

CS: I saw on your Instagram you went to Scotland recently. Where did you play and what was that experience like?

CS: What was your favourite?

CS: Most people you talk to say they either love links golf or they hate it.

EK: "I like it. I don't play it often at all. I can't really complain. Once you get a chance to play it, it's really fun. I don't know if I would like to play it every day, all year round. For the short period of time that you go there and play that, you accept it. It's actually really fun. It's perfect for a short trip to go and play there. Whether it's raining or windy or whatever it is, you just accept and have fun with it.

CS: What are the goals as far as golf goes for the rest of the summer?

EK: "For the rest of the summer I'm not sure how much I'm going to get to play. I'll try and play as much as I can. I think I figured a few things out this summer that I needed to figure out like hitting my driver, hitting my woods and my long irons. I think next summer I am going to have to work on my short game and hopefully I can get down to a five or six (handicap) next summer. That's my goal. I need a coach that can give me a swing that is consistent and I can line up the proper way every time. I hope that I have the eye-hand coordination to figure the rest of it out."