A game of bridge, a bottle of beer and some serendipity put Paul Sherratt on the road that would see him celebrate 40 years as the head pro at Rideau View Golf Club. In those 40 years, Sherratt has had as much to do as anyone with Rideau View, founded by prominent members of Ottawa's Jewish community 60 years ago, elevating from a newcomer on Ottawa's private club roster to a course regarded as one of the best in Canada. 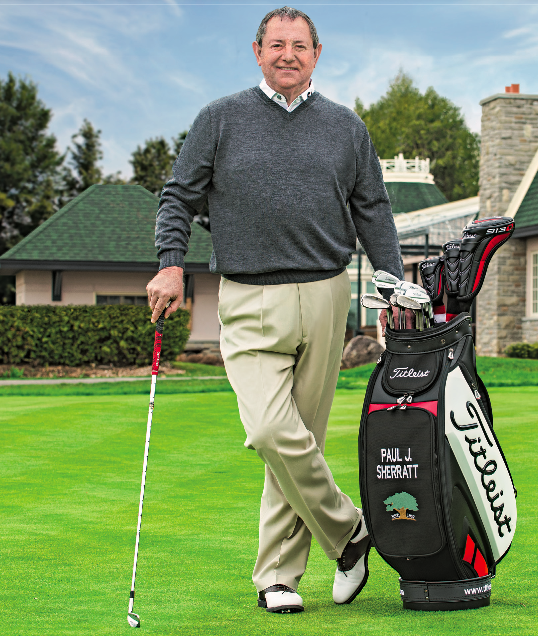 Forty years in one spot. You don't hear about that much these days and you probably will hear less of it in today's transitory workplace.

Sherratt's 40 years at Rideau View and the club's 60th anniversary will be honoured Sunday with a special celebration.

Serendipity played through in the early 1970s to put Sherratt on his path to Ottawa and Rideau View.

In 1972, Sherratt found himself doing what a lot of young men have done: he had dropped out of school (the Brantford native had been studying accounting in Hamilton) and was living with a friend in London, ON, while he figured out what he wanted to do with his life.

He had learned to play bridge from his friend's parents and they were playing with one of his buddy's classmates at Western one night when his friend's classmate, Geordie, got up to the go to the kitchen to get a beer from the fridge.

"Geordie went into the kitchen to grab a beer and on the kitchen counter he saw an envelope from the Royal Ottawa Golf Club. He walked back into the dining room where we were playing bridge and he had the beer in one hand and the envelope in the other," recalled Sherratt.

"He said, 'Who knows somebody at the Royal Ottawa Golf Club?' I said, 'I don't know anybody there, but I applied for a job and I got this in the mail today.' Geordie said, 'I'm a member there and (head pro) Tommy Mann is a great friend of mine.'

His friend's classmate was the late Geordie Hilton, who would go on to become the executive director of the Royal Canadian Golf Association from 1978-88. The Ottawa native was a scratch golfer and a member at Royal Ottawa.

That's how Sherratt started out on the road Rideau View, an unlikely road for a guy, who self-admittedly wasn't very good at the game.

Sherratt's mom worked for a doctor and he caddied for the doctor on weekends at the venerable Brantford Golf and Country Club (the fourth oldest club in North America, founded in 1879) when Sherratt was in Grade 9.

"On Monday morning if you teed off before 9 o'clock and the member who you caddied for gave his permission to the golf pro, you could use his golf clubs and go out and play golf," Sherratt said.

Like he said, he wasn't near the player he would become. After landing the job at Royal Ottawa, he headed off to Montreal for his first assistants tournament. He shot 103.

After beating balls about every spare minute for a year after that, he was winning assistant pro's tournaments.

Sherratt settled into a routine. He was an assistant at Royal Ottawa in the summers and ran a ski shop in the winter. "From '73 to end of the ski season in '78, I worked every single day of the year," he said.

In 1977, when Roger Dagenais left Rivermead to become the head pro at Rideau View, he hired Sherratt as his assistant for twice the money he was making at Royal Ottawa and gave him the opportunity to begin earning money from teaching.

Three years later, the club parted ways with Dagenais and Sherratt was summoned to a meeting by John Holzman in the living room of the late Ed Saslove and was offered the head professional's job.

"The Jewish community is single handedly responsible for me being the head pro here. They protected me at that time, not that I needed protecting. The loyalty and support that they've shown me, and the love, quite frankly, is almost hard to believe. There's absolutely a connection there between me and them. I'm not sure they're aware of it. I know some of them are. They talk to me about it. The level of acceptance has been extraordinary. I never felt like an employee. I always felt a part of their community. I think that says more about the whole thing than anything else I can come up with."

When Sherratt arrived at Rideau View, it was nothing like it is today. There was a cinderblock, warehouse-style clubhouse. The course was mowed at the same height "from fence to fence," as Sherratt put it, and there was no practice range.

And it was quiet.

"It was really quiet," Sherratt said. "There were people who would join and literally have nobody to play with. They would go out and play by themselves. Saturdays, Sundays and holidays, you could shoot a cannon after 12 noon. There was no one here."

Things began to change in the 1980s. An initiation fee cut down on the membership churn and gave the club some money to improve the course.

Superintendent Gord MacMillan set to work improving the quality of the turf. The irrigation system was installed in 1987, followed by drainage in 1993.

"Before that, we never had grass of quality until well near the end of June. You'd have a couple of months where you could putt," Sherratt said.

"Leave it to Gord, he designed and built a core harvester to take the aeration cores off the fairways. We'd top dress the golf course with thousands of tons of sand. It wasn't too many years before the grass in the fairways really started to respond and now our fairways are absolutely spectacular.

"The golf course has gone from nothing to absolutely spectacular."

Sherratt has had a big hand in that evolution, but 40 years in one place?

"I had perhaps an extraordinary involvement in the operation of the golf club compared to most pros because the general manager would probably be doing most of that stuff so I was always heavily involved in committee work, the playing committee and the greens committee," Sherratt said. "It's like going to work feeling like you're running your golf course. That's the way I always felt, like it was my golf course and nobody seemed to take any exception to that. So it never got boring."

Sherratt said he deeply appreciated the club giving him the opportunity to become involved in the PGA of Canada and Sherratt rose to become president in 1999-2000.

"When I think back that I became a head professional and actually became president of the Canadian PGA and represented Canada at the 1999 Ryder Cup in Brookline and at the Masters in 1997, 98, 99 and 2000, and everything else that was involved with that, as well as the U.S. Open invitations and the PGA Championship invitations and going to the retirement dinners for the presidents of the PGA of America who I got to know pretty well, to think I could have done all that, I have to pinch myself on that one. I didn't in my wildest dreams set out to do that," he said.

"Where golf has taken me is unbelievable."

It brought him to Rideau View and together they've flourished.

When Mike Weir was a young player on the PGA Tour, he paid a visit to the St. Jude's Children's Research Hospital in Memphis, TN.