It feels like a strange place on the golf schedule, with the men's majors completed for the year already after their re-ordering in the first season of the condensed PGA Tour schedule.

There's still major golf to be enjoyed, however, with the LPGA in England for the AIG Women's British Open at the Marquess Course at Woburn, just outside of London.

Canadian star Brooke Henderson is coming off a T17 - a rare finish outside the top 15 this season - at the Evian Championship last week.

Henderson has shown some steady progress in her results at the British.

The British Open can often present an entirely different set of playing conditions compared to the week-to-week of the LPGA Tour. The first three of her record-setting nine wins came in the Pacific Northwest (two in Portland at the Cambia Classic and her major win at the KPMG Women's PGA Championship at Sahalee Country Club outside of Seattle).

She likes those big, tree-lined courses and you couldn't find anything more different than links golf compared to the golf experience in the Northwest.

That makes the British Open an interesting case this week. The tournament returns to the Marquess Course where it was played in 2016. It is a parkland course lined with oak, chestnut and beech trees.

You would think that would be a more advantageous setup for Henderson compared to a links course, given her track record, but she didn't have a great result when it was there in 2016. She didn't break 70 and finished with a final round 75.

Given her consistency, I would expect a pretty good performance from Henderson this week. This will be her 19th start of the season. She has 11 finishes in the top 15 and eight times in the top 10.

I like the way Brooks Koepka goes about his business.

The best player in the world does things his way. I thought it was funny how preoccupied they were on the broadcast of the WGC-FedEx St. Jude invitational with cutting away and showing his empty parking spot as his tee time approached.

They seemed to be getting over-the-top concerned when it got to be an hour from his tee time and he still wasn't on the property.

It was pretty cool when Colt Knost, working the broadcast, texted Koepka to see what was up. 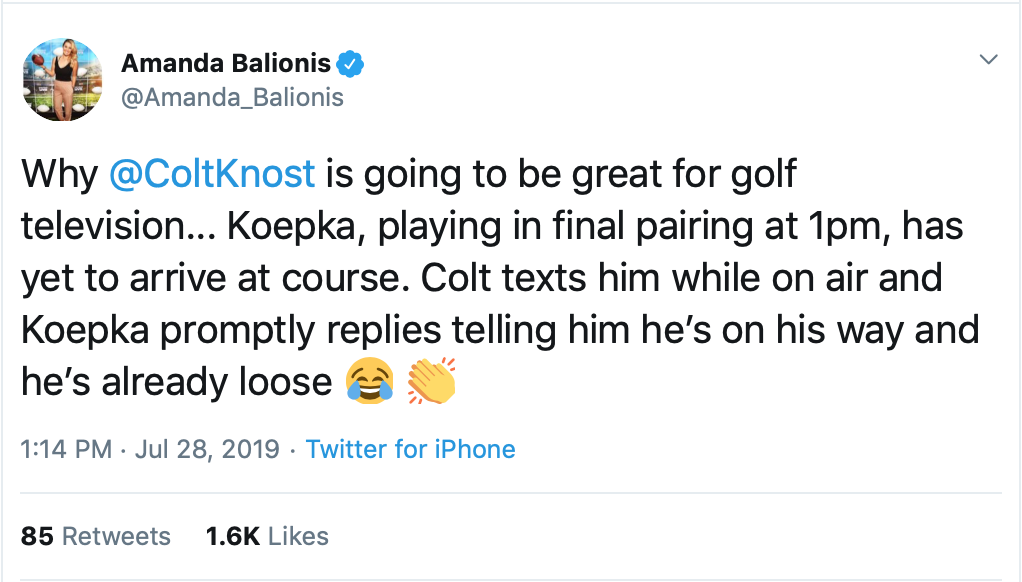 What I've really enjoyed about Koepka lately has been his willingness to take on J.B. Holmes and the latter's slow play. Slow play doesn't seem to be something anybody wants to take on, unless it's a 14-year-old kid at The Masters https://www.golf.com/presstent/2013/04/12/14-year-old-guan-slapped-slow-play-penalty-masters. 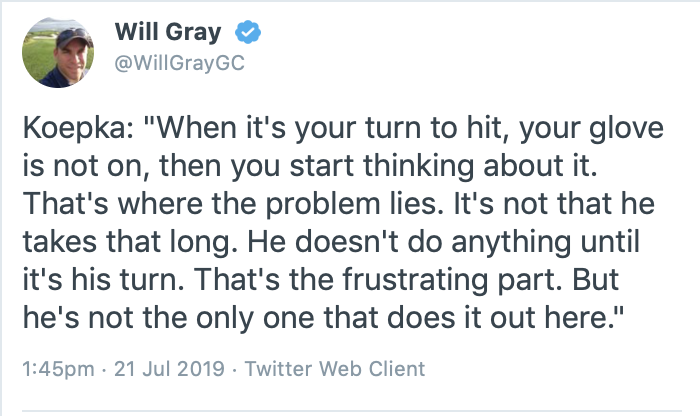 Koepka wades right in. What's anybody who doesn't like going to do? Fight him?

It ends the Open career of one of the greatest links players in history. He won five Open Championships. The Duel in The Sun at Turnberry in 1977 remains my favourite Open Championship. Watson and Jack Nicklaus, nearing the end of his GOAT career but still a force in major golf, each shot 68-70-65 in the first three rounds.

Nicklaus opened a three-shot lead through four holes in the final round and was still up by two with six holes remaining. Watson holed out from off the green on 15 to tie and birdied the 17th to take the lead. Nicklaus recovered from trouble (hitting from underneath some gorse) and holed a 40-footer for birdie on 18 to momentarily tie Watson.

That was a "c'mon, are you kidding me?" moment.

That forced Watson to make a 2-1/2 footer for birdie and the win.

The other Open that stands out for me is 2009, back at Turnberry, when, at 59, Watson had a chance to win with a par on the 18th hole. He couldn't get up and down from behind the green and lost in a playoff to Stewart Cink.

Everybody in the world, except people related to Cink (and maybe some of them) were cheering for Watson to make history.

"The old fogey almost did it," Watson said.

What he did was give us some of the best Open moments in history.

It's shaping up as an interesting week in pro golf

Henderson gets a break; Koepka vs. Chamblee 2 and NHL ref in U.S. Amateur