Bethpage Black - Not for the Faint of Heart

As a setup piece for the 2009 U.S. Open at Bethpage Black Golf Course, I decided the best thing to do would be to head down to Long Island and play the legendary track with the reputation for being the toughest muni you can walk up and play.

Actually, that's not true. In the case of Bethpage, you have to drive up.

Here was the lead I wrote for that piece for the Sun.

"It wouldn't be the first time, but I've got a bad lie in a parking lot.

I can't quite straighten out my legs in my makeshift bed in the back of my rented Jeep Liberty. My golf clubs and luggage are beside me, so I'm crammed into a spot narrower than a U.S. Open fairway and the sleeping options are limited.

The Jeep is parked in an overflow parking lot at Bethpage State Park on Long Island. It's about 1 o'clock in the morning. I don't have to worry about it being a long night, however, because the alarm on my BlackBerry - sitting on the cooler next to my head - is set for 4:15 a.m."

The just-concluded PGA Championship at Bethpage Black might have a few people curious about playing the course. Unlike most of the courses which host major championships, Bethpage is a true public course (black and blue would be a better designation: it has a rating from the blue tees of 76.6 and a slope of 144.)

If you're from out of state, you can book tee times seven days in advance at Bethpagegolfcourse.com (green fees on the Black: $130 weekdays; $150 weekends). The problem is New York State residents can book five days in advance. That means that it is rare when you can get a tee time.

In that case, you can do what I did: the first hour of tee times are saved for the driveups each day. You pull into the lot and back (mandatory) into the numbered places. I've got spot five so I'm a lock to get on in the morning.

I got there about 8:30 p.m. after the approximately eight-hour drive from Ottawa. There are a lot of rules. The vehicle has to be occupied for all but a one-hour break.

I hung around my vehicle and shared the experience with my fellow campers.

One of the them was a guy named John, a 30-something insurance executive.

"I've spent the last month on the USGA website looking at all the holes," he said. "It's going to kick my butt. I'll be walking out with a 95 and smiling about it." 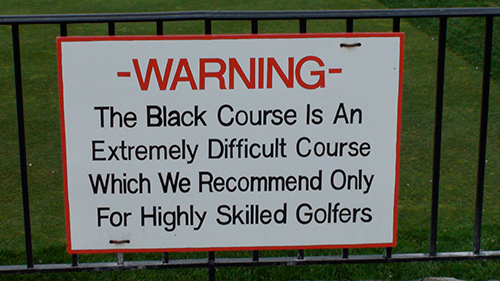 Some other guys were having their own little golf tournament under the parking lot lights, chipping balls from median to median.

"It's midnight at the Black," one of the guys said. "The attraction is the pagentry of the whole U.S. Open in a setting that's kind of the workman's atmosphere. It's a State course. Everybody comes out here week after week, day after day, to play the Red or the Black.

"It's just electrifying is what it is. When you see all the tents set up, it's amazing. It's a fantastic experience and we're just here to enjoy it. I've taken off work, I'm with good friends and we're having a great time. We're all pretty much hackers, but we'll be watching next month and saying, 'I played that hole, I was in the same spot.'"

After a very bad and thankfully short sleep, I'm up and ready when, at 4:25 a.m., a pickup truck comes into the parking lot. John Kryzminski, who had been working at Bethpage for seven years at the time, gets us to line up in our cars in the order of the parking spots. He comes over to the window and snaps a wrist band on my left wrist and hands me bakery ticket No. 17 which will determine the order of selection for tee times.

We drive up to the clubhouse where Bob Heller calls our number and directs us into the cashier area. The monitors display the tee times for each of the five courses at Bethpage State Park (they told me the Red Course is no slouch if you're going to be there for a couple of days).

After killing some time on the sketchy range and talking to Barb the Cashier during her smoke break ("These guys from Texas stayed in slot number one (in the parking lot) for three days," she said. "The course was closed for two days because of rain. I said saw one of them after the round. 'Hey, Joe," - they were here so long, we all got to know them - 'where are the other guys?' They got the call from their wives: come home now. So they left right away to catch their flight"), I head for the first tee.

The rest of the parking lot brotherhood is there. The guys I talked to during the night, some kids from the University of Arizona golf management program and some students from Massachusetts (one of them is from Verdun, the Montreal suburb here I was raised. Small first tee).

The guys I'm playing with are locals: Eddie, a vet of 50 trips over the Black with a best score of 71 from the White tees; Brian, a postal worker who lives 10 minutes away who figures he's played the Black 150 times and Steve, who the other guys call "Doc," who, like myself, is a Black Course rookie.

There's also "Big Dave," who's double looping for Brian and Steve, carrying a bag over each shoulder. Big Dave has worked all the top clubs in the Northeast and puts the Black up there with all of them.

Big Dave was a treat. After one of the guys thinned an approach and we all yelled, "run, run," he said: "This ain't Belmont. They don't run here."

Eddie summed things up as we walked to the 17th tee: "It's like you're a nail and with each swing you're getting hammered into the ground," he said.

After a two-week break, the LPGA Tour will be back at it for the Pure Silk Championship at the Kingsmill Resort in Virginia.

Brooke Henderson is coming off a missed cut at the LPGA MEDIHEAL Championship, her second missed cut in five tournaments which were sandwiched around the eighth win of her career.

She also had a T10 at the Hugel-Air Premia L.A. Open in there, her 40th top 10 in 102 official LPGA starts. That's a pretty impressive percentage when it comes to finishing in the top 10.

Henderson has been on an upswing at Kingsmill: her last three finishes are T26, T14 and a solo fourth last year.

So, who's going to be next to motivate Brooks Koepka?

The new world No. 1 thrives on being dissed.

Lately it's been Brandel Chamblee, The Golf Channel commentator who's refreshingly candid and not afraid to double down on bad takes, who has been ticking off the new PGA champ with comments about his "vanity" weight loss and how the only guys who can challenge Tiger Woods 2.0 are Dustin Johnson and Rory McIlroy. 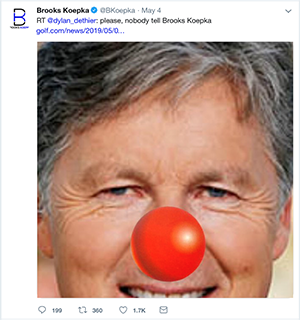 Sunday, on his way to winning his fourth major in his past eight starts, Koepka found motivation in the "DJ, DJ" chants from New York fans as he was making bogey on the 14th hole. That was his fourth of four-straight bogeys on the back nine which drew Dustin Johnson within a shot. There were also yells at Koepka to choke and comments about his girlfriend.

"I tell you what, the hour spent from No. 11 to 14 was interesting," Koepka said in his post-victory meeting with the media. "When they started chanting, 'DJ' on 14, it actually kind of helped, to be honest with you. I think it helped me kind of refocus and hit a good one down 15. I think that was probably the best thing that could have happened. It was very, very stressful, the last hour-and-a-half of that round."

Unlike with Chamblee, Koepka didn't hold a grudge against the New York fans.

"It's New York. What do you expect, when you're half-choking it away?" he said. "I think I kind of deserved it. You're going to rattle off four (bogeys) in a row, and it looks like you're going to lose it. I've been to sporting events in New York. I know how it goes.

"Like I said, I think it actually helped. It was at a perfect time because I was just thinking, 'Okay, alright. I've got everybody against me. Let's go.' I definitely heard the cheers, too, but the chants on 14 green with DJ was when I was kind of in shock. Kind of all that was going on at the same time."

Canadian Hall of Famer Mike Weir and PGA Tour regular Nick Taylor are the first two Canadians in the field at the U.S. Open next month at Pebble Beach after they advanced from sectional qualifying Monday.

Taylor shared medalist honours with Brendan Todd at 10-under 131 for 36 holes (66-65) at The Northwood Club and Bent Tree Country Club in Dallas. Weir, 49, who is competing on the Web.com Tour this season with an eye towards the Champions Tour, had rounds of 69 and 67 to tie for fifth. Ten players advanced from the field of 102. 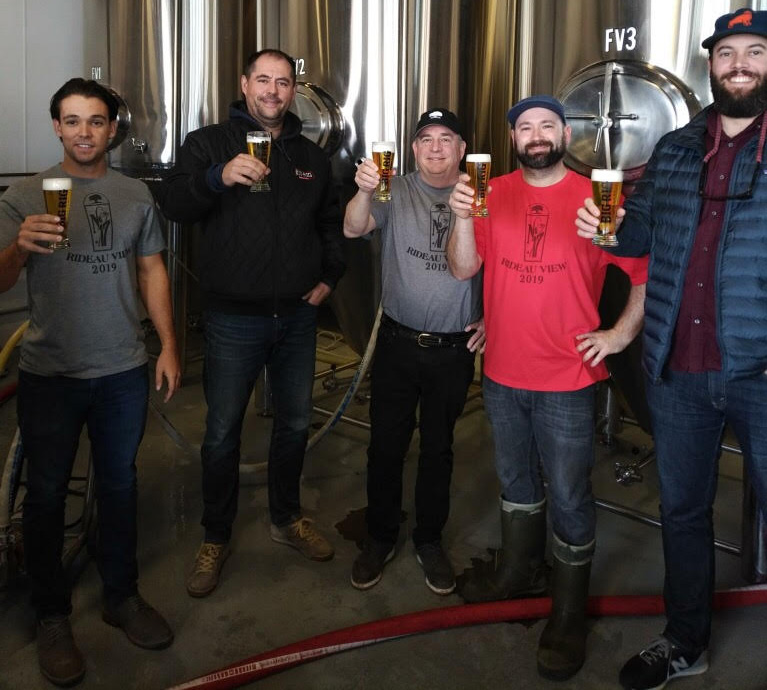