ORLANDO - In an industry where change is inevitable, preparing for it and having it be as seamless as possible is the challenge. 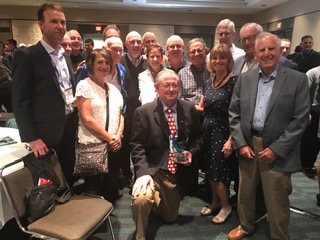 Under Sherratt, the position of head professional at Rideau View has been one devoted to upholding the highest standards of the game and the values that have come to make Rideau View the community that it is.

Sherratt's contributions to Rideau View and the game of golf were recognized Thursday night when Sherratt was the 35th inductee into the PGA of Canada's Hall of Fame at the annual Canada Night at the 2019 PGA Merchandise Show. 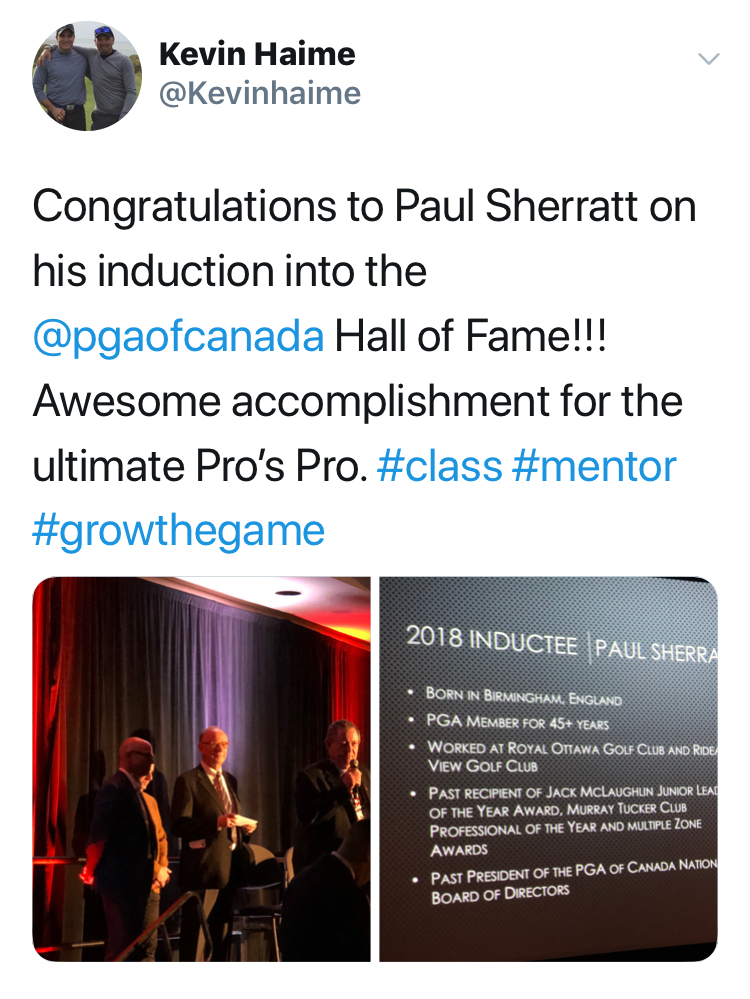 In his acceptance speech, Sherratt thanked his wife Patricia for her support, the trust put in him by the board of directors at Rideau View Golf Club and recalled a conversation we had when the news broke he was going to receive this honour.

"It's been the most amazing 40 year history. Chris Stevenson, a reporter who's here with us tonight, asked me when the announcement was made, what was your first reaction and I said, honestly? Humbled. So when I knew I had to say something tonight, I thought I would do what everybody does, I Googled 'how to accept an award.' It said do not under any circumstances say you're humbled."

That drew a laugh from the crowd.

"It's even called humble bragging and you'll look egotistical," Sherratt continued. "I assure you that's not the case, but it's too late for me now, I've already made the mistake, so I'm very, very proud to receive the reward. When I think back of everything that was in my path, I can never forget the Jewish community for the trust that they gave me to run Rideau View Golf Club, or to help them run it. Tonight, for example, there is a delegation that came up from the southern part of Israel, Miami Beach (more laughs from the crowd), and they brought with them a certificate. They passed the hat back in the Jewish community at the golf club and they've established a scholarship fund in the name of Pat and Paul Sherratt. That's the kind of people that I work for."

The Pat and Paul Sherratt Fund was the idea of Chuck and Bonnie Merovitz. They have had more than two dozen people contribute to the fund.

"I wanted to do something for Paul to show him how much he means to the Ottawa Jewish community," Merovitz said. "I just reached out - I don't know all the Jewish members at Rideau View, but I know a lot of them, so I just reached out to a bunch of people - and we established this fund. The capital stays in the foundation. Paul is the advisor to the fund, so he gets to direct how the interest is distributed and it can go to any charity in Canada.

"I told Paul he should feel like George Bailey in 'It's A Wonderful Life," because not only were people who I contacted anxious to contribute, but I think at least three people who I didn't write to asked me if they could contribute to it." 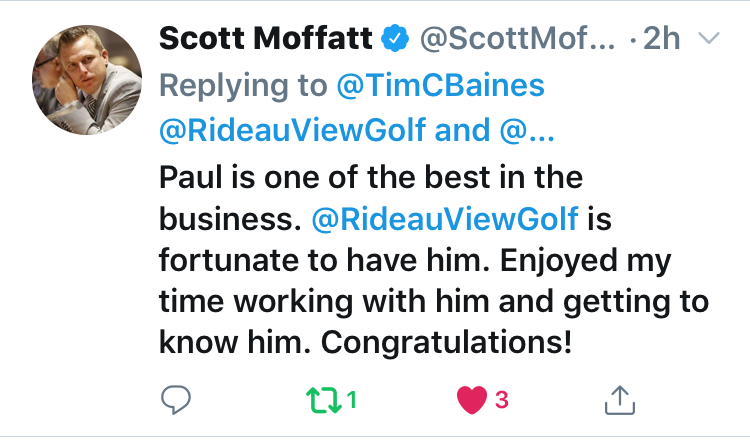 In his speech, Sherratt told the story of how a friend of a friend helped him get his first break in the golf business and launch a Hall of Fame career. In the winter of 1972-73, he had been trying to get a job with no luck and was living with his friend in London and enjoying an occasional night of bridge.

"One of the guys comes over and he goes into the kitchen to grab a beer and he comes out holding an envelope. He says, 'who knows somebody from the Royal Ottawa Golf Club?" I said, 'I don't know anybody, but I got that letter. (Royal Ottawa pro) Tom Mann sent it to me in the mail today.' So I had managed to get my name on a list that the PGA distributed every spring for entry level candidates. I found out later that Ivy Mann had picked out 10 names off that list and given them to Tom. She basically threw darts and I got one of the letters.

I said, 'do yo know somebody at the Royal?' He said, 'well, hang on for a second,' and he grabbed the phone and phoned Tom Mann and he gets on the phone and they're high-fiving each other verbally over the phone and he says, 'Tom, don't look any farther, I've got your man for you.'

"That fellow was Geordie Hilton, the late Geordie Hilton, and I had never met him before, but he and my wife and I became very fast friends. I got the job at the Royal Ottawa and everything went from there."

Four years later, Sherratt moved over to Rideau View and three years after that, he was the head professional.

"A golf pro really defines the golf club," Sherratt said. He has appreciated the importance Rideau View has given to the position of the golf professional to help determine what the club should be and how it should be achieved.

Sherratt said he has watched what's happened to many of his colleagues and how their roles and influence have been reduced over the years. The job description of the head pro has changed, and not in a good way.

"Now at many clubs, it has nothing to do with how much influence the golf professional can have on the enjoyment of the game by its members by introducing them, their spouses and their children to the game and helping them play better golf," Sherratt said. "It's all about how many shirts did you sell? What margins did you make? How many dozens of golf balls did you sell? What a bad metric for a golf pro.

"At Rideau View, we never thought about when we could play our next game of golf. Everything was about the client. It was about the member. We should be here to enhance their experience."

Those ideals and values are not going to change under Robinson.

"Matt is a very, very unique individual," Sherratt said. "He has a single-minded determination that you don't see in many people. You see it in successful people. Nothing will distract him. Matt has an absolute commitment for all the right reasons for coaching of young people and older people alike. He can't be pigeon holed as just a young person teacher.

"He understands how people think. He has a strong understanding of the psychology of being. Those are my words. He understands things in a way that I don't understand. That is the way business, society and culture have moved towards social media and the type of communication involved in social media. He is completely up to speed on all that.

"He can move what I've started and what he's taken over and he can continue to advance that in a direction that is consistent with the way business and culture operate in the 21st century and I can't. He is not distracted." 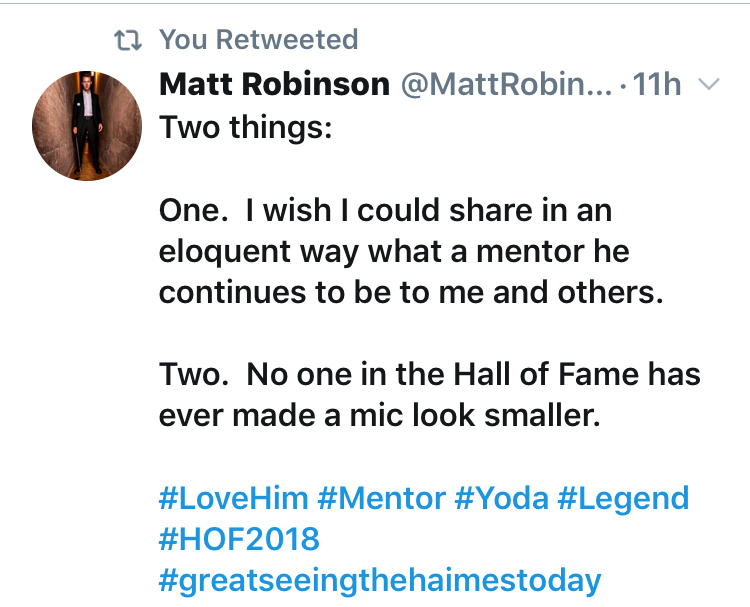 Robinson knows he's got a challenge.

In his interviews with the club's executive committee. Robinson said: "I compared (Paul's) achievements to that of Wayne Gretzky's prolific scoring records BUT over the length of a Gordie Howe career. Those 'shoes' won't fit anyone else.

"I'm excited about the opportunity ahead and know there is a path for me to walk on in my own shoes."

That said, Robinson has learned important lessons from Sherratt that have become the foundation of his career as a golf professional, one that saw him be selected as the George Knudson Award as the PGA of Canada's 2017 Teacher of the Year. 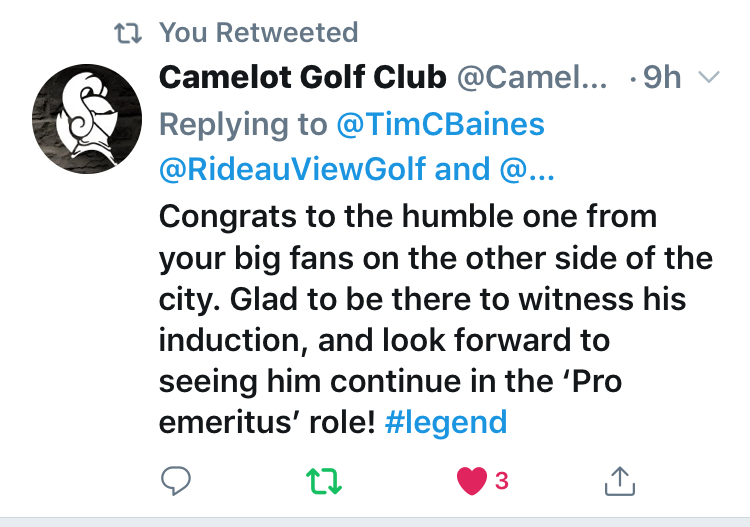 While Robinson, as Sherratt said, is going to be move forward with the best of today's technology, there won't be a departure from the values that make Rideau View the club and community that it is.

"We'll continue to do what we've done well," Robinson said. "Rideau View will be a leader in the growth of golf by providing access to those who want to learn and together we'll continue to invest in ourselves as well as the course to provide the facilities and programming to our membership so they may enjoy the game for life. That's the vision."